Yingjie Zhang, Assistant Professor in the Department of Materials Science and Engineering at the University of Illinois Urbana-Champaign’s Grainger College of Engineering, has won the prestigious Arnold and Mabel Beckman Foundation’s Beckman Young Investigator award. Zhang is one of 11 recipients nationwide, who were selected from a pool of over 250 applicants after a three-part review led by a panel of scientific experts. 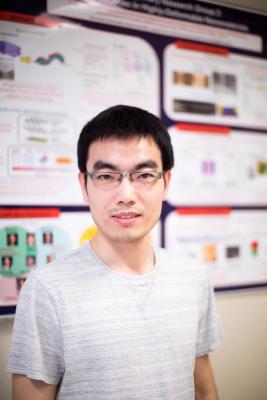 The Beckman Young Investigator Program provides research support to some of the most promising faculty members in the early stages of their academic careers. The award hopes to foster research and innovation that will open up new avenues of research in science.

Projects selected from the Beckman Young Investigator Program are generally funded for four years and are given around $600,000 in funding over the term of the project.

Zhang was awarded for his proposal “3D Atomic Scale Spectromicroscopy of Liquid-Solid Interfaces.”

“This award is both a great recognition of the existing achievements in my lab, and a strong booster for us to explore uncharted territories of science,” Zhang said.

Zhang joined the MatSE faculty in 2019. He earned his PhD in Applied Science and Technology from the University of California, Berkeley.

Zhang’s research group focuses on the interfacial science of materials. The group’s research is highly interdisciplinary, spanning areas such as physical and materials chemistry, condensed matter physics, and chemical engineering.

The results of such research will impact a number of pressing societal issues, including energy conversion and storage, information technology, and healthcare.

"With the support from the Arnold and Mabel Beckman Foundation, we will develop a new type of microscope that performs atomic-scale chemical imaging in liquid, with a special focus on liquid-solid and biomolecular interfaces,” Zhang said. “This microscope will integrate state-of-the-art scanning probe imaging, infrared spectroscopy, and optomechanical coupling effects. Once invented, we will use it to solve critical problems in renewable energy and biology, such as the key structural factors determining the energy density in batteries, the atomistic dynamics of enzyme catalysis, and the kinetic pathways of biological signal transduction."

The Beckman Young Investigator award is just one in a growing list of honors Zhang received in his short career. Notably, he received the Dorothy M. and Earl S. Hoffman Scholarship from the American Vacuum Society in 2014, the Graduate Student Award from the Materials Research Society in 2015, the Chinese Government Award for Outstanding Self-Financed Students Abroad in 2015, the Beckman Postdoctoral Fellowship at UIUC during 2015-2018, and the ACS PRF Doctoral New Investigator Award in 2019.