Quantum computers could eventually tackle certain problems that today are difficult or impossible to solve, even for the most powerful high-performance computers. Before that can happen, scientists and engineers must overcome major challenges related to the stability and scalability of the technology. Under a new award from the U.S. Department of Energy, a team of researchers at the University of Illinois Urbana-Champaign and Argonne National Laboratory will be pursuing one promising avenue: the use of magnetic materials to mitigate the “noise” that impacts the performance of quantum computing hardware. 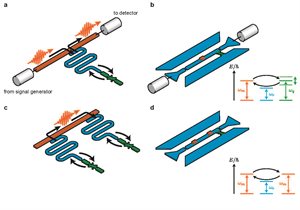 Quantum computing hardware currently comes in different flavors, from charged atoms to light particles to chips laced with superconducting wires. In that last case, the quantum processing chip lives inside a special refrigerator at a temperature close to absolute zero (−273 degrees Celsius). The extreme environment freezes out the heat that erodes quantum functionality. Even at such temperatures, though, there are still unwanted disruptions to both computations and data transmission. For example, thermal noise can sneak in through the wires that go into the fridge to control the computer and extract data. The question is, how can the impact of that noise be softened?

One of the first approaches the UIUC and Argonne researchers will try is to design a one-way path for signals traveling in and out of the fridge, thus reducing the likelihood that heat can get in. Such non-reciprocal circuitry already exists, but the team wants to integrate this feature on the chip in a novel way: by harnessing magnetic features.

“Magnets have built-in non-reciprocity, meaning you can isolate one side from the other,” said Axel Hoffmann, who is a Founder Professor of Engineering in UIUC’s Department of Materials Science and Engineering and a researcher in its Materials Science Lab. “What we aim to do is to create an approach that hybridizes magnons [i.e., magnetic effects] with excitations of microwave photons or light excitations [which are other signals that are typically used for quantum information], to create a device that works at low temperatures and reduces noise.”

One of the team’s top priorities will be to identify magnets that work at low temperatures. The researchers will explore both known and new materials to find candidates that can handle an extreme, frigid environment and also be compatible with quantum operations on-chip.

“This is not trivial,” said Hoffmann. “Many magnets work well with microwaves [i.e., the microwave signals that are critical to these devices] at room temperature. We need materials that work also well at much lower temperatures, which may completely change their properties.”

The 3-year, $4.2 million project will also explore use of magnetic materials as a medium for converting signals from one frequency to another while preserving quantum information. If researchers are successful in creating a hybrid device at small scales, this work could also have applications in non-quantum devices for sensing and communication, such as in Wi-Fi or Bluetooth technologies.

“If we are wildly successful within these three years, we will have magnetic structures directly integrated with quantum circuitry,” Hoffmann said.