Two faculty members from the Materials Research Lab have been elected to the American Academy of Arts and Sciences, one of the oldest honor societies in the nation.

Physics professor Nadya Mason and materials science and engineering professor Kenneth Schweizer are among 252 new members elected to the academy this year, including artists, scholars, scientists and leaders in the public, nonprofit and private sectors.

“The MRL is exceptionally pleased to count two new members of the American Academy of Arts and Sciences among our faculty,” said Paul Braun, MRL director and the Grainger Distinguished Chair in Engineering. “Prof. Nadya Mason and Prof. Ken Schweizer have been active members of the MRL community since each joined the University of Illinois, and along with their exceptional contributions to science, have held leadership positions in the MRL. Prof. Mason currently serves as the Director of the NSF-supported Illinois Materials Research Science and Engineering Center, which is housed in the MRL, and plays an important role in setting the scientific agenda of the MRL. Prof. Schweizer served as the Associate Director of the MRL-affiliated NSF Nanoscale Science and Engineering Center for the Directed Assembly of Nanostructures, during which time he helped expand considerably both the depth and breadth of research on nanoscience within laboratory.” 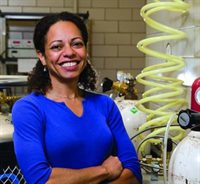 Mason is the Rosalyn Sussman Yalow Professor in Physics at Illinois. As a condensed matter experimentalist, she works on quantum electronics and materials. Mason is a fellow and former general councilor for the American Physical Society, former chair of the APS Committee on Minorities and has been a regular “Whys Guys” science presenter on local TV. In 2019, she delivered the TED Talk “How to spark your creativity, scientifically.”

During her career at Illinois, Mason has demonstrated the surface states in topological materials and individual superconducting bound states in graphene-based systems. In 2014 Mason was appointed a John Bardeen Faculty Scholar in Physics at Illinois. She is the recipient of numerous awards, including the Maria Goeppert Mayer Award, the Edward Bouchet Award, the Dean’s Award for Excellence in Research at Illinois and the Denice Denton Emerging Leader Award. Mason also is affiliated with the Holonyak Micro and Nanotechnology Lab at Illinois.

Schweizer is the Morris Professor of Materials Science and Engineering and a professor of chemistry and chemical and biomolecular engineering at Illinois. He also is affiliated with the Beckman Institute, and earned a Ph.D. in physics at Illinois. The overarching goal of his research is to develop novel molecular-scale statistical mechanical theories of the equilibrium and dynamic properties of polymers, colloids, nanocomposites, elastomers, gels, glasses and other forms of soft matter, and apply them to understand experiments and assist in the design of new soft materials.

Schweizer has been the chair of the American Physical Society Division of Polymer Physics and associate director of the National Science Foundation Nanoscale Science and Engineering Center for Directed Assembly. Among his numerous awards are the American Physical Society Polymer Physics Prize, John H. Dillon Medal and Fellowship, Hildebrand Award in the Theoretical and Experimental Chemistry of Liquids of the American Chemical Society, the Everitt Award for Teaching Excellence, the Drucker Eminent Faculty Award and the Department of Energy Award for Outstanding Scientific Achievement in Materials Chemistry.

The American Academy of Arts and Sciences was founded in 1780 by John Adams, John Hancock and others who believed the new republic should honor exceptionally accomplished individuals and engage them in advancing the public good.

“We are honoring the excellence of these individuals, celebrating what they have achieved so far and imagining what they will continue to accomplish,” said David Oxtoby, the president of the American Academy. “The past year has been replete with evidence of how things can get worse; this is an opportunity to illuminate the importance of art, ideas, knowledge and leadership that can make a better world.”